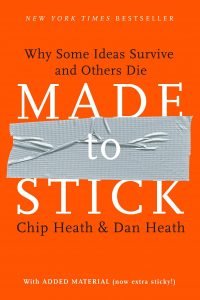 “When you say three things, you say nothing.”

Made To Stick Short Summary

Made To Stick explores why some ideas survive and others die. Chip and Dan Heath lay down the 6 principles behind why some ideas live centuries. A great book on how to write compelling stories.

Why Some Ideas Stick?

Most of the ideas you interact with are interesting, but not sensational. Truthful, but not mind-blowing. Important, but not ‘life or death’. As a result, you forget about them in seconds.

Can you remember the last ad you’ve seen and what was it about? Probably not.

But why do some ideas stick and others don’t?

There are 6 factors of SUCCESs for stickiness:

The goal is to strip an idea to its core without “dumbing down” the message.

The military uses simple phrases called Commander’s Intentions to communicate the objective of a mission.

“I could spend a lot of time enumerating every specific task, but as soon as people know what the intent is they begin generating their own solutions.”

No plan survives the contact with the enemy. The specifics don’t really matter. What matters is the core message.

Two questions to strip an idea to its core:

Once you found the core message, you need to translate the core using the SUCCESs checklist.

Use Analogies To Simplify Your Idea

We learn much better when a new concept is tied to another one we already know.

You probably don’t know what is a pomelo. Which explanation resonates with you the most?

The second one wins easily.

The grapefruit reference feels like planting a flag in your brain. You use all you know about grapefruits to deduct what is a pomelo.

The key is to use analogies your audience recognizes.

If you don’t know what a grapefruit is, you got no value from the comparison.

Analogies can also guide behavior even when they are not specific.

Disney theme park employees are called “cast members”. They don’t interview for a job, they audition for a role. When they are walking around the park they are onstage.

Disney doesn’t need to detail how employees should act in the park. They can make their own judgment knowing they are performing onstage.

The first step of effective communication is getting attention, the second is keeping it.

To do this you need to lean into the Unexpected.

“The most basic way to get someone’s attention is this: Break a pattern.”

Your brain is designed to tune out consistent patterns. That’s why don’t notice the noise of an air conditioner, the smell of a candle, or a sight of a bookshelf.

You only notice things when they change.

Humans like to think in patterns. The key to grabbing their attention is to break these patterns.

How to break a pattern:

Surprising your audience isn’t enough to keep them engaged. You need to lean into their interests.

Mystery is the best way to arouse interest.

“Mysteries are powerful, Cialdini says, because they create a need for closure. “You’ve heard of the famous Aha! experience, right?” he says. “Well, the Aha! experience is much more satisfying when it is preceded by the Huh? experience.””

Open up gaps in your audience’s understanding of the world and they will stick until the end to know what you have to say.

The headline “There is a new drug sweeping teenagers, and it may be in your own medicine cabinet!” grabs your attention by pointing out something you don’t know. Now that you know about a drug that is sweeping teenagers, you cannot tune out until you know which one it is.

Curiosity is the intellectual need to answer questions and close patterns. The need to know the answers is what keeps your audience engaged.

“The trick to convincing people that they need our message, according to Loewenstein, is to first highlight some specific knowledge that they’re missing.”

We have an easier time remembering objects compared to concepts.

That is one of the reasons why proverbs like “a bird in the hand is worth two in the bush” are so sticky.

As you have seen before, a “supersized grapefruit” is a much better explanation of what is a pomelo than a more abstract alternative.

Being concrete isn’t difficult. But as you gain knowledge on a topic and you get more familiar with the abstract ideas, you start to experience the Curse of Knowledge.

You don’t remember what it feels like to know little about the topic. As a result, you start using abstract terms without even noticing.

“But being concrete isn’t hard, and it doesn’t require a lot of effort. The barrier is simply forgetfulness— we forget that we’re slipping into abstractspeak. We forget that other people don’t know what we know. We’re the engineers who keep flipping back to our drawings, not noticing that the assemblers just want us to follow them down to the factory floor.”

Fight your instincts to speak in the abstract and base your ideas in the concrete.

To persuade people into believing an idea, you and your idea should feel credible.

The easiest way to achieve credibility is to associate your idea with an authority figure like an expert. But this is not the only way.

You have 5 alternatives to build credibility:

The goal of making a message “emotional” is to make people care.

Feelings inspire people to act. For people to take action, they have to care.

A charity will raise more money when they connect a donation with a specific person.

You don’t give to ‘African poverty”, you help a specific child.

Similarly, your customers don’t want to know about the features of a product. They want to know what problem are you solving.

You should focus on how will your customers feel once they buy a product from you. Benefits over features.

Finally, you can appeal to self-identity.

If you are productivity geeks, you need to subscribe to my 5-Bullet Monday newsletter. ?

Stories are so sticky because they encourage you to relive them in your mind.

When used correctly, stories have the potential to unite all the SUCCESs factors into one consumable piece of information.

The best way to use a story is to always be on the lookout for them. Most good stories are collected and discovered, rather than invented.

Subway’s story of Jared, a man who lost 245 pounds by eating at the restaurant was discovered. The marketing campaign built around this story was a success.

There are 3 basic types of plots your story can take: 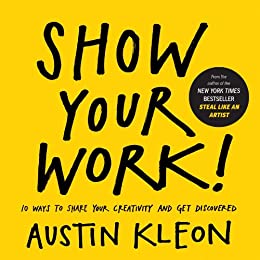 Show Your Work! By Austin Kleon: Summary and Lessons